First, in case you didn’t know, we have some Departmental awards for graduate students to report!

Excellence in PhD Studies Travel Award, 2014: for excellence among students who have completed their coursework and Research Areas:

Kurt Holukoff, for the high quality of his dissertation work
Ian MacDonald, for presentation of a paper at the CPA

Graduate student Rosalind Abdool presented two papers and had a poster display at the 25th annual Canadian Bioethics Society (CBS) conference in Vancouver, BC. The first paper focused on trust in the healthcare settings and its various interpretations. Rosalind introduced a new way of defining trust in the healthcare context and provided some practical tools on how to foster trust. The second paper was a co-authored manuscript developed by the University of Toronto’s Joint Centre for Bioethics Difficult Transitions Working Group. Bioethicists from across the GTA and other collaborators have been working together to raise awareness around legislative and policy gaps for patients who lack representation and require assistance with discharge planning, as well as to provide concrete recommendations to advocate for this patient population. The poster presentation displayed the ICU ethics checklist research project that Rosalind and colleagues at St. Joseph’s Health Centre have been piloting.

At the CBS conference, Rosalind was also re-elected to the CBS board, as the membership co-ordinator for a two-year term. She remarks: “I am very excited to continue to participate on the CBS board for another term. The CBS is a wonderful organization that is expanding and developing new initiatives to have a positive impact on Canadian health care.” Rosalind also had the chance to explore Vancouver through the spectacular view of a seaplane!

Tim Kenyon writes, “In late May and early June I spent two weeks at the Eidyn Centre for Epistemology, Mind and Normativity at the University of Edinburgh. This was a very productive and research-intensive time. I gave a talk titled ‘Content Dissolution’, in which I argued that the language pragmatics and social psychology of testimony raise serious problems for the influential thesis that audiences have an a priori entitlement to accept testimony. (This view was most influentially spelled out in Tyler Burge’s 1993 paper ‘Content Preservation’. See what I did there?) The faculty members, postdoctoral researchers and graduate students I met in Edinburgh were keen and helpful interlocutors; it seemed like everyone was doing very interesting work.

“I also attended two outstanding conferences that took place at Edinburgh during this time, one on virtue epistemology in eastern and western philosophical traditions, and one the British Wittgenstein Society annual meeting, which focused on issues of basic epistemic entitlement.”

And Heather Douglas says her recent conference on campus was great: “The workshop on Science-Policy Interfaces:  International Comparisons I organized went beautifully, with great speakers, attendees, and organizational help (with special thanks to Teresa Branch-Smith, Dylon McChesney, and A.Y. Daring for their on-the-ground assistance and to Debbie and Vicki for all their help from the office). The workshop was funded by SSHRC, UW, and the Balsillie School (BSIA), and slides for most talks are posted here. And a write-up from the workshop by two attendees, Nicolae Morar (Penn State) and Kevin Elliott (MSU), is here.
Here are some pics! 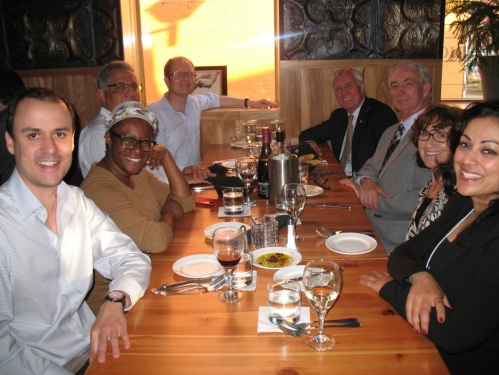 Graduate Chair Doreen Fraser passes on some interesting news about a workshop on non-acadmiec careers we had at the end of April. “We held our annual grad student workshop on non-academic careers at the end of April. This was an opportunity to welcome back alumni Doug Andrews  (now Director of the Master of Actuarial Science Program at UW), Joseph Mikhael (now a business analyst with the Pest Management Regulatory Agency of the federal government), and Marcia Sokolowski (now Co-Director of Ethics at the Baycrest Centre for Geriatric Care in Toronto). Current student Jim Jordan kicked off the event with an informative presentation about resources available for non-academic career searches and the alumni described their career paths and answered questions. The useful practical advice conveyed included recognizing (and appropriately describing) the wide range of relevant skills which are honed in philosophy graduate programs, the importance of being responsive to feedback, and taking advantage of opportunities to volunteer while a grad student. We also heard about the different ways in which their educations in philosophy continue to contribute to their professional and personal lives. Thanks to Jim, Marcia, Joe, and Doug for participating and to Dave for taking the lead in organizing this event.

Matt Doucet and I (Patricia Marino) joined the grad students mentioned above in presenting at Congress. Matt says, “I presented two papers at the recent CPA at Brock University. Both papers were part of my unofficial research specialization in the philosophy of Rob Ford. The first, “‘Just Say No’ (for now): the ethics of illegal drug use”, generated an enthusiastic debate about whether the injustice of drug prohibition means that there is nothing morally objectionable about the use of illegal drugs. The second,”Weakness of will without commitment violations?” co-written with John Turri, presented new experimental evidence that the standard philosophical models of weakness of will are far too narrow, and proposed a new and original model in their place.” For my part, I participated in a session on philosophy blogging, with a presentation on “Why Does Life Suck? Philosophy Blogging and the Really Big Questions” — the title, of course, drawn from one of the many interesting search terms people used when finding my blog online.

I was also so pleased to attend convocation this year, where my PhD student Natalie Evans and Paul Thagard’s student Tracy Finn were both convocating! Pictures! 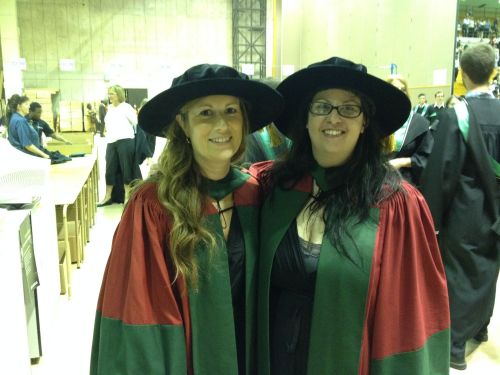 Dave DeVidi says that over the past couple of months he’s taken part in a number of activities that in varying degrees involve putting his professional philosophical concerns and my avowed commitments into action:

“Back on April 12 I ran a workshop for families with members who live with developmental disabilities, hosted by Citizen Advocacy of Ottawa.  The session was called Aroha: A Tool for Building and Sustaining a Good Life. “Aroha” is a Maori word variously translated as affection, community, compassion, empathy, respect, friendship, understanding and love.  An Aroha is a mini-corporation, the objects of which are to look out for the interests of a single vulnerable individual, and that works towards giving that individual control over her or his own life (which is the key philosophical connection for me).  I was invited because I am president of the first Aroha, set up 12 years ago for one of my friends in Guelph, so part of a group that has a lot of experience with how Arohas can work and how to set one up.  The session  was fairly well attended, and I have heard reports that interest in the idea has since spread out beyond those able to attend.

“I was pleased in late April to be able to work as a ‘Faculty Co-Facilitator’ at Waterloo’s Teaching Excellence Academy.  At the TEA, faculty members spend four days re-designing one of their courses.  When I was  a participant in the Academy two years ago, I learned a lot—in spite of my view that I was already doing things well and a bit of skepticism going in.  In recent years several other department members have participated in the TEA, and they report going through the same thing. Even though it’s officially 40% of a regular faculty member’s job, it’s a rare thing for a faculty member to get concentrated time to think about the how and why of teaching.  It was a lot of fun being on the other side at the TEA, watching some really smart people re-think something they were already pretty good at, and I think make themselves better teachers.

“On May 23, I was an invited panelist on an Ontario Confederation of Faculty Associations session in Toronto called Transformative Feminist Leadership in the Academy.  The session was attended by about 50 academics from all over Ontario.  My own remarks were focused on relatively practical matters. I began by addressing a question that would probably leap to mind when someone like me steps to the microphone at a session with that title: what’s the role of straight, white, middle-aged males in the contemporary feminist struggle?  I noted that I don’t publicly call myself a feminist, regarding the word as, for people like me, an accolade to be won by actions and not mere words, and suggested that the right role for someone like me is as a worker doing very practical things to make stuff happen, ideally behind the scenes.  Turning to the announced topic, I argued that feminist leadership was a matter not just of having feminist goals in view, but also involved taking an appropriate route to achieve them—a feminist leader, qua feminist, is consultative and team-oriented, but qua leader is willing to stop talking, set priorities and make decisions; that transformative academic leadership was not a matter of vision (of which there is a surplus in the academy) but of practical, strategic, incremental and (most importantly) persistent work; and that, as with any group seeking profound change, a key to success is to avoid spending more time fighting one another instead of working towards common objectives.  The other three panelists had very different life experiences from mine, so they had interestingly different takes on the question, one of them for instance taking “transformative” to be a description of changes in people rather than in institutions.

“June 16 was the date of the first AGM for Facilitation Wellington Dufferin, a new non-profit corporation of which I am the inaugural president.  This is an important milestone after eight years of work by the Wellington Dufferin Steering Committee for Independent Facilitation and Planning.  The goal of the group is to provide people with developmental disabilities with planning support, and support to implement plans once they’re made. The goal is to allow people with communication challenges, little life experience, and other challenges, to make important decisions about their own lives, and ultimately to lead satisfying lives in the community.  We have spent years pioneering an experiential training process for independent planner/facilitators, and now have a number of facilitators about whom we can confidently say they are ready to provide independent facilitation of the highest quality. I think this is an important step in the evolution of supports for developmentally disabled persons, as it helps ensure that those supports are tailored to a particular individual’s needs and goals.  FWD is also part of the Ontario Independent Facilitation Network, a group of similarly minded independent facilitation groups from across the province.  We held a provincial forum in North Bay in mid-May, which I attended on behalf of FWD.

Tim Kenyon’s “Defining and Measuring Research Impact in the Humanities, Social Sciences and Creative Arts in the Digital Age” appeared in the journal Knowledge Organization 41.3: 249-257. The abstract and publication details are online here.

Don’t forget, as always, you can see more news and check out upcoming events at our Department website.